Salem is one of four closely related works painted by Homer in 1872; the others are An Open Window (private collection), Reverie (formerly collection of Joan Whitney Payson), and At the Window (Princeton University Art Museum).  Along with a few others of the same period, notably Portrait of Helena de Kay (Fundacion Coleccion Thyssen-Bornemisza, Madrid) and Morning Glories (formerly collection of Mr and Mrs Paul Mellon), these paintings all reflect Homer’s familiarity with and indebtedness to 17th Century Dutch art, especially the characteristically dark interiors, illuminated by bright light coming through windows, of such Little Masters as Gerard Dou and Gabriel Metsu.  In the summer of 1872 Homer visited the town of Hurley, New York, on the Hudson, where he was reported sketching old Dutch houses and interiors that were common to the area.

To quote Abigail Booth Gerdts in her commentary on Salem in the catalogue raisonne, “this painting employs the same principal elements [as the other three in the group of four]: choice of model; her singular dress (likely signifying mourning); her ruminative mood; and the figure’s placement in a shadowed interior contrasted with a fresh, bright world just beyond her window. The replacement of the domesticated landscapes seen through the windows in those paintings with a panoramic view of a seaport town under brilliant light is a marked change in theme. No prominent structure of the skyline of the old town of Salem, Massachusetts, as it is now known corresponds to buildings seen here. The view may be a composite of several of the New England port towns Homer would have known well” (Lloyd Goodrich and Abigail Booth Gerdts, Record of Works by Winslow Homer, Vol.II, 2005, p.177).

This enchanting painting became known as Looking Out to Sea in the early 1990s but, as explained in the catalogue raisonne, is properly identified as Salem; “on 23 January 1877 the Commercial Advertiser reported that ‘an Exhibition of fine American and foreign oil paintings was opened at the art gallery and salesroom of Mr. Edward Schenck, No. 67 Liberty street, yesterday, which merits the attention of picture buyers….Winslow Homer contributes an interior with a pretty girl seated at an open window in an attitude of deep thought. It is a well finished picture.’”  The New-York Times referred to the presence in the exhibition of  ‘a small Winslow Homer, representing a Salem girl, with Salem in the distance,’ and following the sale the New York Herald remarked that ‘among the best prices fetched [was] Salem, Winslow Homer, $165.’

Salem was included in the exhibition Winslow Homer and the Critics: Forging a National Art in the 1870s, which originated at the Nelson-Atkins Museum of Art, Kansas City and traveled to the Los Angeles County Museum of Art and the High Museum of Art in 2001-2.  In her catalogue essay Margaret Conrads wrote of the “brilliant effects of light and shade” in this and related paintings, stating further that the woman’s dark costume and the shadowy interior are contrasted against, and also enlivened by, the bright light pouring through the window. The sharp angle of the light bathes the woman’s face and white fichu and surrounds the plant on the windowsill, connecting the symbolism of the geranium – gentility and expected meeting – with the woman’s station and situation. The light further plays an important role in this carefully balanced composition, where horizontal and vertical, round and straight, and light and dark interweave across the entire canvas to tell the story of watching and longing (Catalogue pp 49-50). 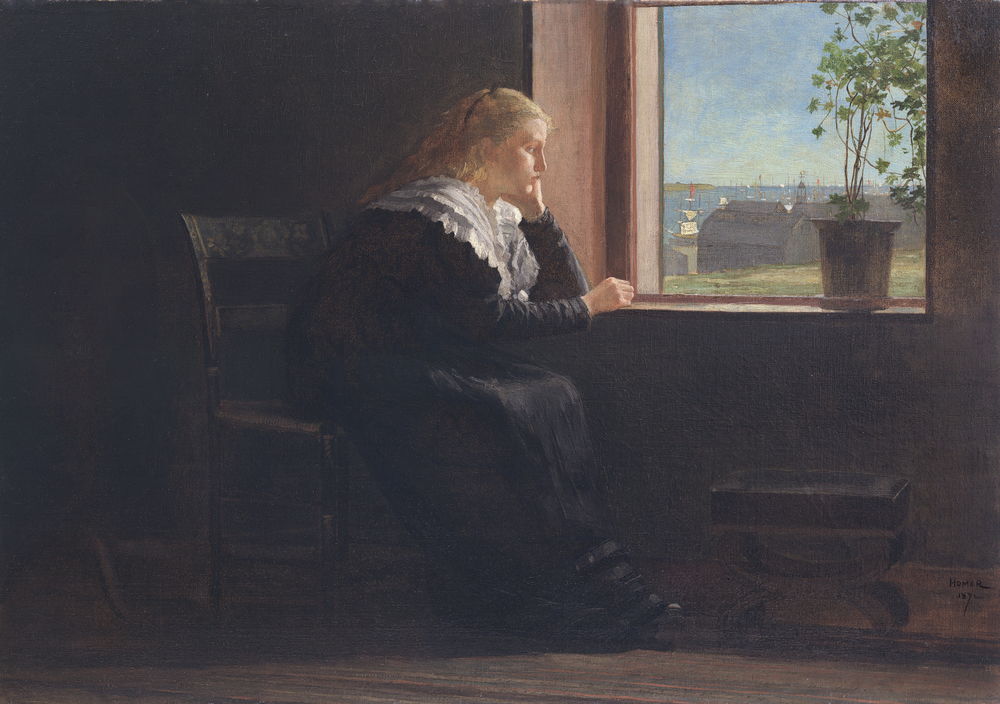