Born in Germany and active in New York and Pennsylvania from 1848 until about 1872, Roesen painted still life paintings of fruit and flowers exclusively throughout his career and has long been regarded as the exemplary American still life painter of the third quarter of the 19th Century.  Like this canvas, most are unsigned, but the characteristics of color and detail are uniquely his.

As described by Roesen authority Judith O’Toole, this painting “employs a horizontal format and displays fruit arranged on a dark colored marble table top.  The central device is a large wicker basket, filled to brimming with various types of fruit…to the right, a bird’s nest containing three eggs, the same number as Roesen’s children,  rests on a grape leaf.  This element appears in numerous paintings by the artist and is considered by some to be a motif he used in lieu of a signature.  To the left, a small wicker container holds strawberries which are the focus of a bright yellow canary perched on the basket’s rim.  The composition is crowned by Roesen’s signature use of grape leaves and coiled grape tendrils.  Other beautifully painted elements include the peeled lemon with its graceful spiral of rind and the deep, red cherries set directly in the foreground…..This painting is one of only several known works by Roesen containing a canary…Nature’s Bounty, signed and dated 1851…is in the collection of The White House.  Fruit with Yellow Bird and Nest (1851) is in a private collection….Roesen often used similar motifs from one canvas to another, rearranging them to make new, different compositions.” 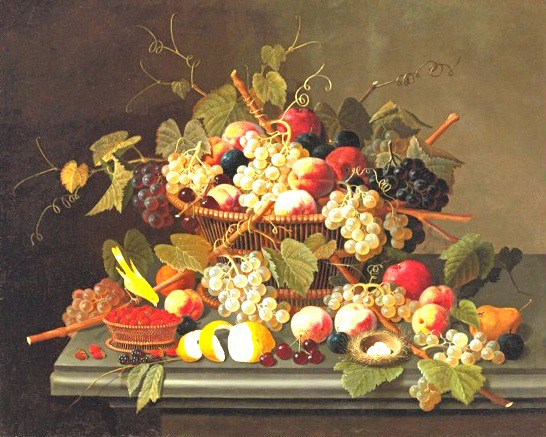