Severin Roesen is the best-known and most admired painter of still lifes of fruit and flowers in the latter part of the 19th Century in America.  He was prolific and polished and his large production suggests that he enjoyed great popularity during his career.  While many of his compositions are large in size, some of the most finely executed examples are of smaller scale, so fitting for the domestic interiors for which they were designed.

The other most successful American still life specialists of the period include George Henry Hall, John F. Francis, William Mason Brown, Andrew J. H. Way, George Cochran Lambdin, and Martin Johnson Heade who was also a distinguished painter of luminist landscapes.  Biographical details on Roesen are scant, but it is believed that he was born in the German Rhineland, where he began his painting career, and emigrated to New York City in 1848, moving over the next decade to various parts of Pennsylvania.  It was in Williamsport, Pennsylvania, where he settled from 1862 to the end of his life about ten years later that he earned his considerable reputation.  Roesen’s typical table-top compositions featuring profusions of fruit and flowers are often described as images of “Nature’s Bounty”, in the words of still life authority William Gerdts, “the ultimate embodiment of mid-century optimism, representing the richness and abundance of the land, the profusion of God’s bounty in the New World, his blessing upon the American Eden through this cornucopia of plentitude” (Painters of the Humble Truth: Masterpieces of American Still Life 1801 – 1939, Columbia, Missouri, 1981, p.87).  While his compositions derive from European prototypes, 17th and early 18th-Century Dutch ones in particular, as well as those of the 19th-Century Dusseldorf school – for example by Jacob Preyer – so popular at the time, Roesen’s paintings have come to be regarded as the exemplary American still lifes, necessary for every respectable and comprehensive American collection. 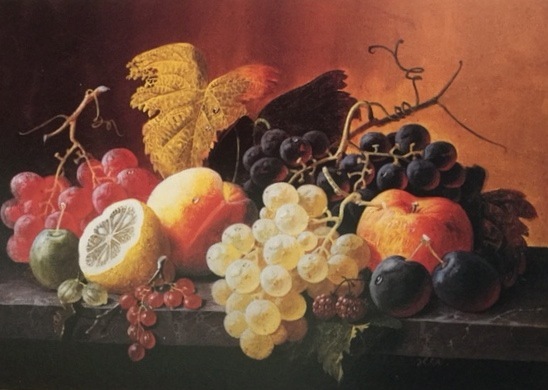