MacMonnies was born in New York and had many important commissions over the course of his career in the United States, but for most of his life he lived and worked in France.  Early on, at the age of 18, he achieved an initial success by becoming a studio assistant to the great Augustus Saint-Gaudens in New York, but soon thereafter traveled to Paris where he studied with Falguiere at the Ecole des Beaux-Arts.  MacMonnies was influenced by his teacher’s figural naturalism, which was the prevalent French taste at the time, and he eventually settled in the artists colony of Giverny where much of his sculpture was modeled and cast.

Bacchante with Infant Faun was one of MacMonnies’s most well known works, as well as one of the most notorious sculptures of its day in Boston and New York.  It was originally completed in 1893 and first cast in 1894, in numerous editions: some 83 inches high and some 68 inches high, with in addition a number of 34-inch and 16-inch reductions.  The Bacchante reflects the new naturalism; its slender proportion and fluid grace exemplify the taste in America for the French Beaux-Arts style that replaced neoclassicism at the end of the 19th Century.  The first large (83 inch) cast had been given to the sculptor’s friend the architect Charles McKim, whose firm designed the Boston Public Library, to whom McKim donated the sculpture for the building’s courtyard in 1897.  A group of “proper” Bostonians, led by the Women’s Christian Temperance Union, was scandalized by the nudity and apparent wanton drunkenness  of the figure which they thought an insult to American motherhood.  In protest McKim withdrew the bronze and gave it to the Metropolitan in New York, where it remains a much admired monumental treasure in the museum’s American Wing.   Through the dissemination of the smaller casts the Bacchante became a famous work of sculpture that symbolizes the liberal spirit in American art. 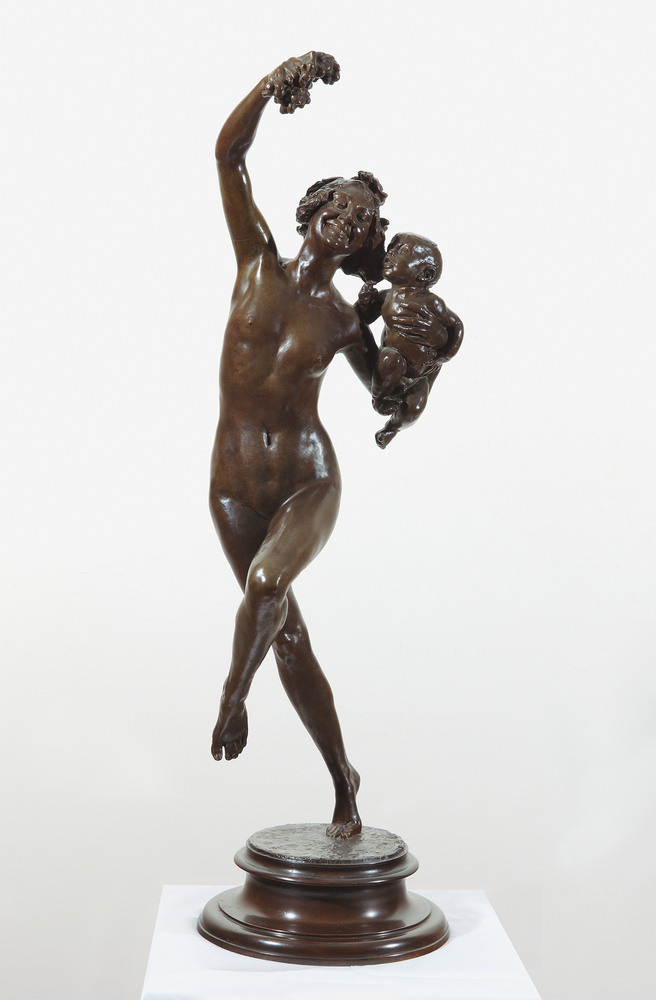