This work is included in the John La Farge Catalogue Raisonné by James L. Yarnall.

Twilight at Vaiala (Samoa) was painted from the hut where La Farge and Henry Adams stayed from October 1890 to January 1891.  This is one of four known oils painted by La Farge during his visit to Samoa and one of only approximately a dozen oils that the artist executed during his nearly ten month sojourn in the South Seas.  A similar view is represented in the oil In Front of Our House, Vaiala, Girl on Grass (formerly collection of the Whitney Museum of American Art), which also features an S-shaped tree trunk.  La Farge remarked that he set up “headquarters in Vaiala, a little way from Apia, from which a little river separates our part of the land.  Further on, another small river closes out the territory, and separates us from Apia” (Reminiscences of the South Seas, Garden City, New York: Doubleday, Page and Company, 1912, p. 95).

This rare La Farge South Seas painting features a view across a green meadow towards the sea, which is visible through the line of trees and palms in the middle distance.  The artist captures the indistinct glow of twilight; the trees appear dark against the resonant blue-green sky and the pink flares of sunset light up the tips of clouds.  In the left foreground, under the tree, there appears a small low hut or Samoan tomb monument. 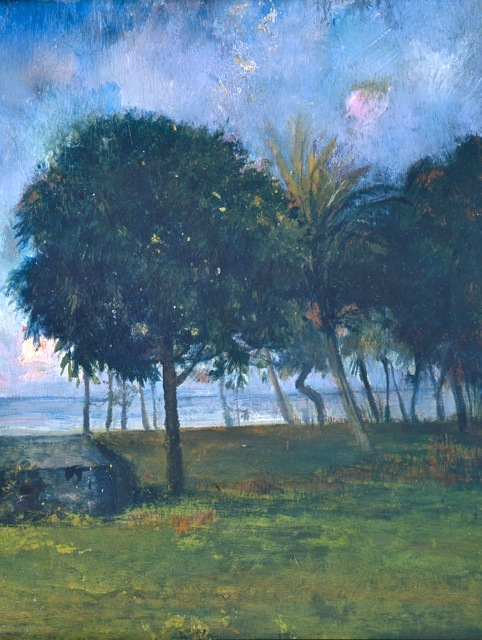