J. Alden Weir was one of the principal American Impressionist artists from the 1880s through the 1920s, a founding member of the “Ten American Painters” who exhibited together and represented the innovative impressionist styles of the time. He is largely associated with landscape and figure studies in Connecticut, where his home and studio, Weir Farm, is today preserved and open to the public, a memorial to his and his colleagues’ progressive spirit. Towards the end of his life, fulfilling a varied and much admired career, he traveled to Nassau in the Bahamas where The Wharves, Nassau was painted in 1913. As noted by Weir authority Doreen Bolger Burke in her book on the artist that accompanied the retrospective exhibition at the Metropolitan Museum in 1983, “The Wharves, Nassau is the best painting he did there; in it he not only captures the brilliance of the Caribbean light but he also works with renewed assurance, applying his glistening colors to the strongly designed framework provided by the wooden dock with its bustling inhabitants” (Doreen Bolger Burke, J. Alden Weir – An American Impressionist, New York, 1983,   p. 247, illus).

Shortly after Weir’s return from Nassau to New York he was elected President of the National Academy of Design as well as Trustee of the Metropolitan Museum of Art, and in 1937 he was one of the four painters, along with John H. Twachtman, Childe Hassam, and Mary Cassatt, included in John I. H. Baur’s important exhibition 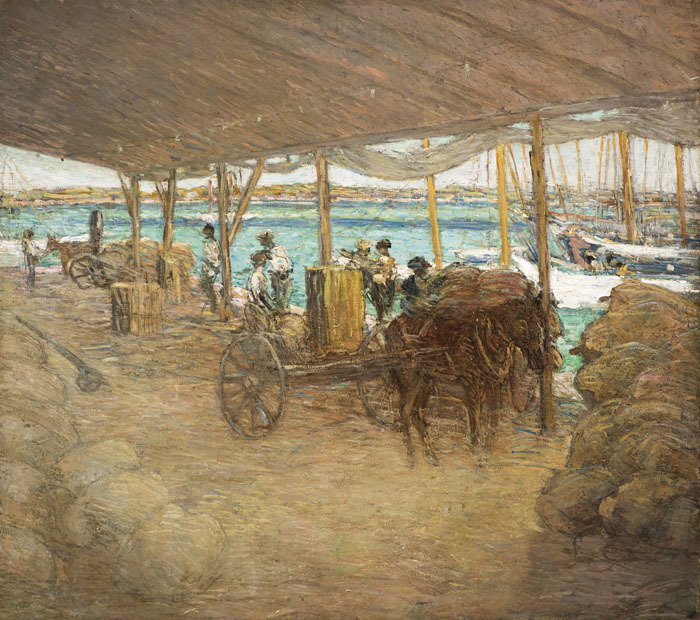