George Bellows: Love of Winter, organized by the Norton Museum of Art, Palm Beach, and travelled to the Newark Museum of Art and the Columbus Museum of Art, Ohio, 1997-8, illustrated in the catalogue, No. 8, pp 70-1, essays by John Wilmerding and David Setford

The winter of 1909 was a critical time in the development of Bellows’s very individual style. In the middle of January 1909, he left New York with friends to spend somewhat less than a month in Zion, New Jersey, at a summer house belonging to the family of a roommate, the future playwright Eugene O’Neill.  Like Bellows’s later encounters with landscape at sketching grounds in Maine, this turned out to be an unusually productive period, in terms of both the number of small-scale paintings completed and the inventiveness of their technique….Having developed a style that was distinctively his own, Bellows used it to create several masterpieces, one after another, beginning in August 1909.  First and foremost among these was the justly celebrated pair of boxing pictures, Stag at Sharkey’s and Both Members of This Club. [“Technique and Theory: The Evolution of George Bellows’s Painting Style”, essay by Michael Quick in The Painting of George Bellows, exhibition at the Los Angeles County Museum of Art and travelling, 1992-3]

Clouds and Hills represents a view from the side of a hill, over a small river valley, and across a rolling landscape of fields and low hills….this painting is a highly accomplished rendering of aerial recession….Clouds and Hills is unusual in Bellows’s oeuvre not merely because it is a rural scene, but also because man’s presence is a very minor theme of the work….Clouds and Hills demonstrates Bellows developing his fluency in the handling of paint, and this may be seen as the major contribution of the Zion paintings as a group.  Here, areas of thick impasto, applied by palette knife, are juxtaposed with smoother areas of thin brush-applied paint.  Mastery of wet paint is demonstrated where Bellows has dragged the brush, or its end, through pigment to create the effect of branches or tree trunks. [David Setford in Love of Winter, p. 70] 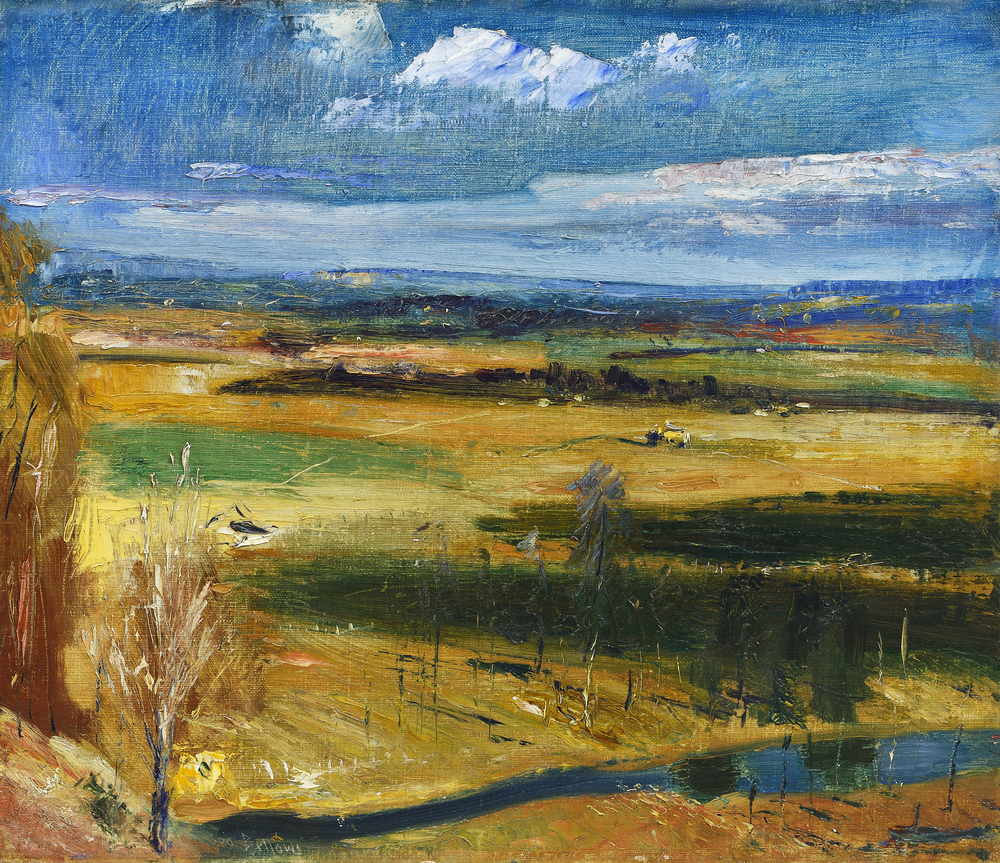