Hartman was born in Kansas, and following initial studies at the Art Institute of Chicago enrolled in 1911 in the Royal Academy in Munich, under the Symbolist painter Franz von Stuck, where the avant garde group of Russian and German painters, known as Der Blaue Reiter, including Wassily Kandinsky, Franz Marc, Alexej von Jawlensky and August Macke, was active and influential. A common goal among these innovators was the search for spiritual truth and the exploration of the psychological effects of color and line in visually provocative abstract compositions. They were more interested in dream imagery and symbols drawn from the inner mind than from observation of nature as practiced by the Realists and Impressionists. Such an approach is evident in Hartman’s extraordinary and paganistic Exotic Fantasy of 1913. The elongated blue woman at the right is a clue to the painting’s meaning: as for Kandinsky, the color blue represented spirituality; the pink flamingoes flying above represent grace, and the sinister leopard-snake suggests and association with the devil, sin and lust.

Hartman moved to New York in 1915, the same year many of his paintings were shown at the Panama-Pacific International Exposition in San Francisco. He exhibited in New York at the Folsom Gallery as part of a group of painters and sculptors calling themselves “The Eclectics”, and by the 1920s had abandoned his symbolist subjects to focus on precisionist views of Manhattan and scenes in New England. The “exotic” compositions remain his most distinctive and rarest works. 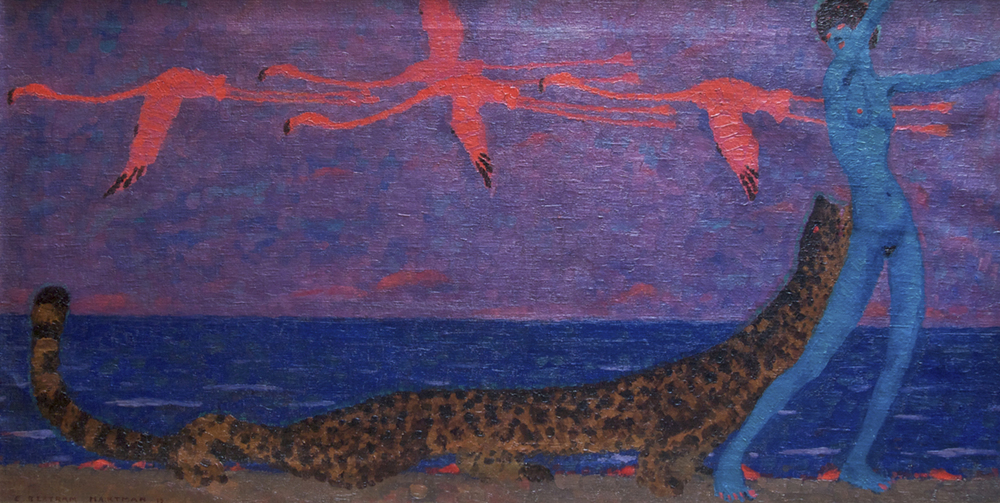