In the process of exploring the possibilities of portraiture, Calder began to take it – and his subjects – more seriously.  In fact, some are remarkably probing likenesses – at times even flattering, particularly that of Calder’s wife Louisa…Other such compelling portraits include those of Jenny and Margie Sargent McKean, which provide a foil for the more caricatural portraits.  Jenny and Margie were the daughters of Calder’s friend Margarett Sargent (1892-1978), a sculptor and painter from a prominent Boston family (and a distant cousin of John Singer Sargent).  The two artists’ paths had crossed in New York around 1923 and again a few years later in Paris [as recounted in The White Blackbird: a Life of the Painter Margarett Sargent, 1996, by Honor Moore].  …Another encounter in Boston in January 1930 resulted in a commission to create wire portraits of Margarett’s young daughters.  Jenny Sargent McKean (1923-1973), Margarett’s “black-haired, bright-eyed daughter,” was seven years old at the time.  Calder’s likeness (Figure 14) features the young girl gazing up at the adult world with a wide-eyed sense of wonder, her bright eyes defined by a dense looping of wire topped with zigzagging eyelashes.  Calder gives her an earnest expression, which imparts a certain shyness as she sits patiently and obediently for her portrait.  The artist enjoyed the company of children, appreciated their intuitive response to the world, and was clearly adept at portraying youthful physiognomy and conveying the innocence of childhood.  Given Calder’s attraction to children, it is surprising – and unfortunate – that Jenny and her older sister Margie are the only ones Calder is known to have portrayed in wire. [Zabel, p.19] 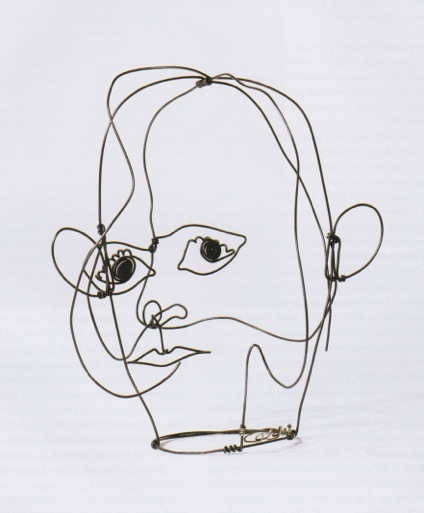