Included in the CUNY/Goodrich/Whitney catalogue raisonne of Homer

Bananas for the Attorney General was originally owned by Homer’s frequent patron Edward W. Hooper of Boston, treasurer of Harvard College and trustee of the Museum of Fine Arts, who acquired over twenty works by the artist, including the oil Huntsman and Dogs of 1891 (Philadelphia Museum) and the watercolor Deer in the Adirondacks of 1890 (Museo Thyssen-Bornemisza, Madrid).  It then passed to his daughter Mabel who married Louis Bancel La Farge, and remained until 2005 in the La Farge family.

In early December of 1884 Homer had set sail for Nassau, where he did some 32 watercolors, nine of which were later reproduced in an article in the February 1887 issue of Century Magazine.   He stayed in the Bahamas until mid-February 1885, visiting Eleuthera and Harbour Island as well as Nassau.  In his watercolors of this trip he focused on everyday activities of the local people, gathering and selling fruit and sponge, like the girl bearing bananas at the gate of the Attorney General of the Bahamas.  In this instance Homer has captured the vivid Caribbean light with remarkable spontaneity.  On his return to New York a reporter for the Times noted that Homer had come back with “a big portfolio of water color sketches, in which his well-known boldness in painting things as they are appears to great advantage.  Most artists do not dare to paint the subtropics at their most brilliant moments.”

Bananas for the Attorney General was included in an exhibition of Homer’s latest watercolors at the Reichard Gallery in New York in 1885, and then in the retrospective of 1958-9 shared by the National Gallery of Art and the Metropolitan. 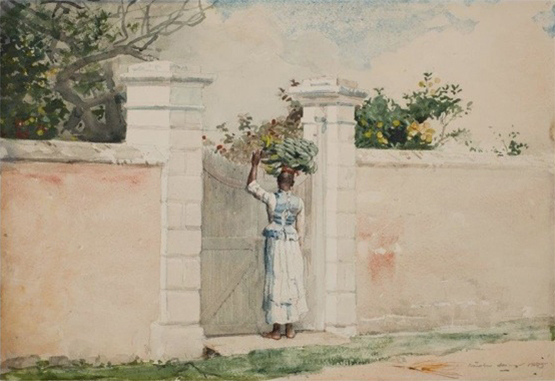