Robert Henri, Painter, organized by the Delaware Art Museum, and traveled to the Pennsylvania State University Museum of Art; the Cincinnati Art Museum; the Phoenix Art Museum; and the Corcoran Gallery of Art, Washington DC, 1984, catalogue by Bennard Perlman, No.82, illustrated

“My People”: the Portraits of Robert Henri, organized by the Orlando Museum of Art, Florida, and traveled to the Fort Lauderdale Museum of Art and the Columbus Museum, Georgia, 1994, catalogue p. 35, plate 41

Henri, one of the leading members of the so-called “Ashcan School” of progressive American artists in the early years of the 20th Century, is most admired for his figure paintings, and Betalo Nude is one of the most widely exhibited of his nude subjects. His Figure in Motion of 1913 (Terra Foundation), a large standing nude, had represented the artist in the landmark Armory Show of 1913, and he used the reclining figurative composition in 1916 for both this Betalo painting and his famous portrait of the philanthropist, patron and artist Gertrude Vanderbilt Whitney (Whitney Museum of American Art).

Betalo Rubino, a professional dancer, was one of Henri’s favorite models, and appears similarly nude and reclining in another Henri composition of the same time, Betalo Nude, in the Milwaukee Art Museum, and is the subject of the monumental full length Betalo Rubino, Dramatic Dancer in the St. Louis Art Museum.  She had previously appeared in Dancer in a Yellow Shawl of 1910 (Columbus Museum of Art, Ohio) and in Girl with Fan, also of 1910 (Pennsylvania Academy of the Fine Arts).  Henri painted a number of other likenesses of Betalo, including in her celebrated role as The Dancer of Delhi, private collection, Connecticut.

As the noted art historian Bennard Perlman observed in his catalogue for the exhibition Robert Henri, Painter, “in Betalo Nude a sometimes yellowish flesh tone is allowed to extend beyond the diagonal thrust of the sensuous form onto the sheets, yet the warm hue is basically massed in the body and isolated from the blue background.” 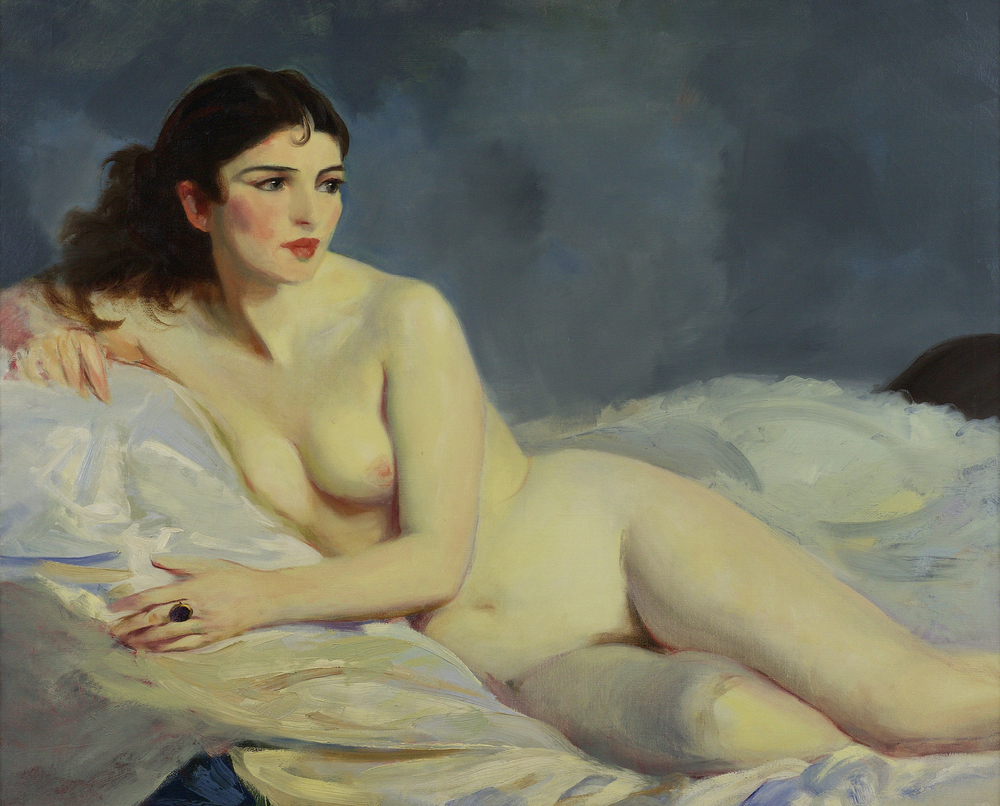