Julius Stewart was born in Philadelphia and lived mostly in Paris, where for many decades he was known as a “Parisian from Philadelphia”, and indeed he maintained his ties to Philadelphia throughout his life, exhibiting regularly at the Pennsylvania Academy of the Fine Arts from 1877 to 1913.  His father, William S. Stewart, was a well-known wealthy expatriate art collector.  As did numerous other Americans, young Julius studied at the Ecole des Beaux-Arts with Jean-Leon Gerome as well as later with Raimundo de Madrazo.

Stewart is best known for his figurative compositions, both portraits and narrative
Subjects, frequently featuring glamorous Parisian women.  By the 1890s he was favoring nudes in plein-air landscape settings, exemplified by Grand Matin., which was one of four canvases included in the major 1904 St. Louis exhibition, and which was singled out for illustration and description, as follows, in the official publication: The nude figure of a beautifully proportioned young women leaning against a tree trunk, in the depths of a dense forest, penetrated here and there by sparkles of sunshine filtering through the leaves.  The figure is in cool shadow – in part tinged with green in the reflected lights – except where a few touches of brilliant sunlight on the flesh enhance the delicacy of its pearly grays by contrast.  In the painting of the flesh, the sheen of sunlight on the leaves, the translucence of the leaves between the observer and the sun, and in the charming unity maintained in the composition, the artist has achieved signal success.

Julius Stewart is represented in numerous important museum collections, including the Wadsworth Atheneum, Hartford, Connecticut, the Los Angeles County Museum of Art, the Detroit Institute of Art and the Musee d’Orsay; the Stewart paintings in the latter two institutions are similar plein-air nudes. 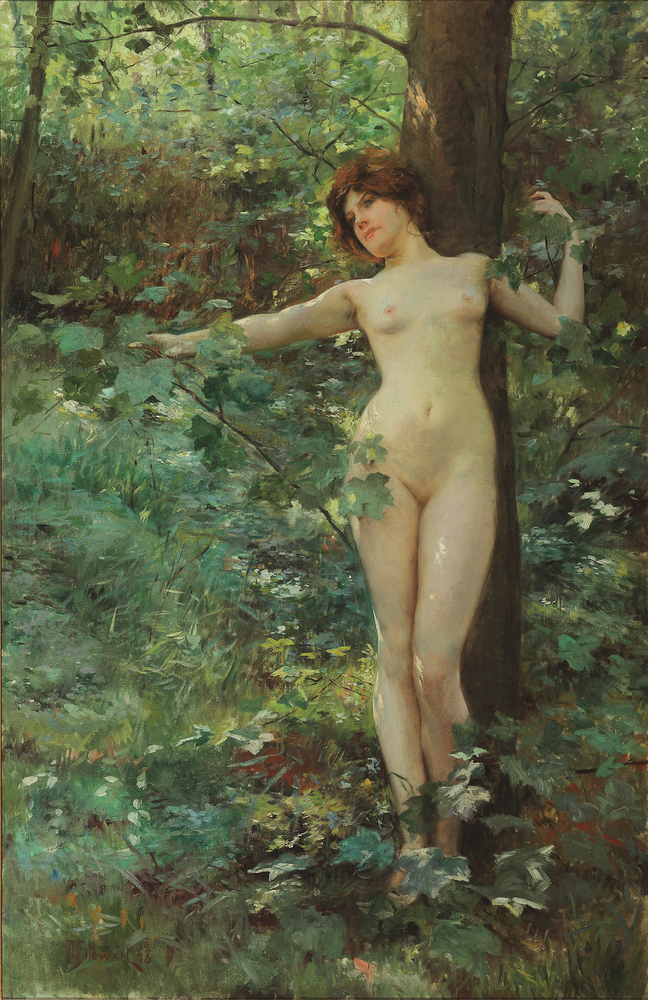