As observed by Barbara Jaffe, “given the problem of religious imagery for an artist who wanted to be identified with modernism, Stella’s synthesis of the decorative in Oriental art, the iconic in archaic art and the representational in Southern Italian folk art was an extraordinarily effective solution for his Madonna paintings as is evident in The Virgin of the Rose and Lily….As in Piero della Francesca, but more archaized, three dimensional form is abstracted within closed contours in The Virgin of the Rose and Lily. Shown close up in the picture plane as a standing figure at three-quarters length, her hands crossed over her breast, the Virgin is turned slightly towards the left margin. The geometrized treatment of her haloed head, a perfect egg shape set on a long cylindrical neck, also reminds one of Piero, while the features call to mind Amedeo Modigliani’s female faces with arched eyebrows, the lines of which continue with no break to become the outline of the nose. The egg/oval motif is repeated in the veil, from the edge of which a narrow band of copper-colored hair is visible, and opened symbolically as the cape flows down both sides of her Brancusi-like figure. On the central axis of the Virgin, at the base of her neck, a wide-open rose, symbol of the Madonna, rhymes coloristically with the Virgin’s symbolically closed lips…An extraordinary interplay of curves relates the Madonna to the very large pure white lily, a widely recognized symbol of her chastity. In the right hand lower corner of the painting, a young woman represented bust length in profile kneels reverently, her hands clasped in prayer as she gazes up at the Virgin. Oversize fruits and flowers with birds perched on their stems frame the painting along the left and right sides. Behind the figure of the Virgin, the deep blue of the Bay of Naples stretches to Vesuvius.”

This Madonna is closely related to the smaller Virgin of 1922 in the collection of the Brooklyn Museum. 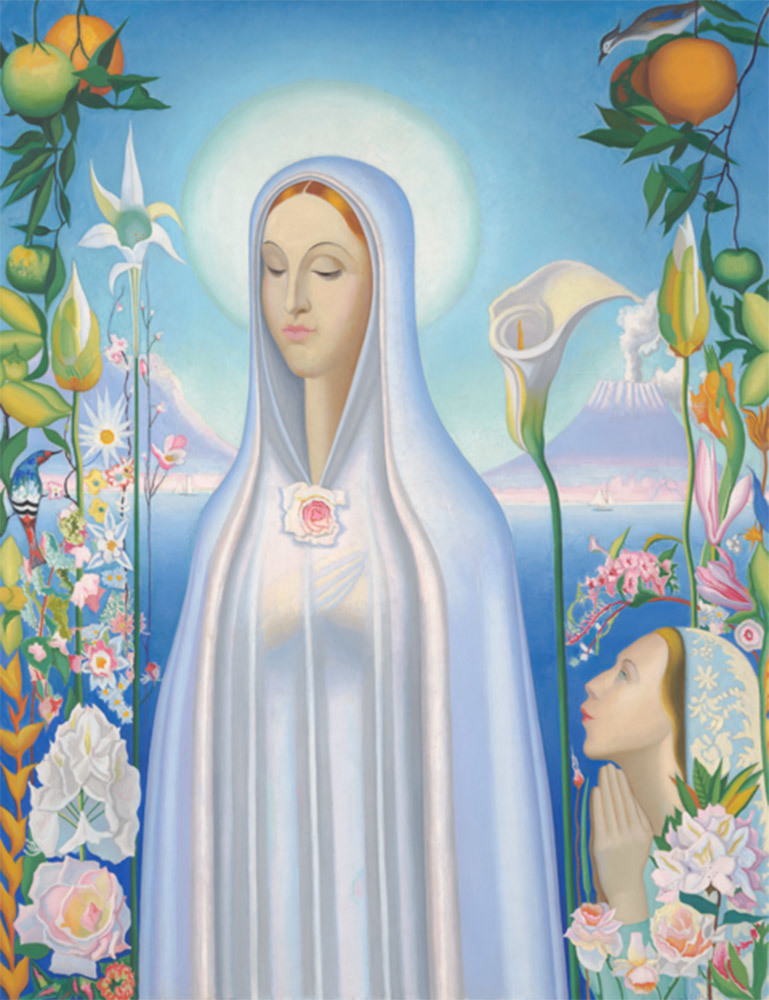