Lisa N. Peters, John Twachtman (1853-1902) and the American Scene in the Late Nineteenth Century: The Frontier within the Terrain of the Familiar, Ph.D. dissertation, City University of New York, 1995

A leading American Impressionist, Twachtman was ahead of his time in making paintings that lean significantly towards abstraction although always rooted in the real world.  Hailing from Ohio, his first immersion in the world of art was his experience as a student in Munich, where he ventured with his fellow Ohioan Frank Duveneck.  He then spent time in Venice with Duveneck and William Merritt Chase, and by the early 1880s like so many fellow Americans went to Paris.  Thereafter Twachtman and his family settled near Greenwich, Connecticut, the locale of most of his paintings for the rest of his career.  By this time he had developed his very personal idiom of impressionistic landscape painting and had become one of the most distinctive painterly voices of his time.

Twachtman ventured West to paint views of Yellowstone Park on commission for William Wadsworth of Buffalo, including this Yellowstone Park, distinguished from a similar view by its more sunny and colorful palette.  Relatively few of the Impressionist painters went to the West, which was primarily pictured in the 19th Century by the landscape masters such as Albert Bierstadt and Thomas Moran, whose vistas are dramatic and romantic, and later by the Taos School painters, who focused on indigenous scenes and people.  Twachtman applied his vision of luminescent color -- yellow, pink, lavender – to the vast plunging landscape of Yellowstone, with the hot sandstone cliffs of the foreground set against the cooler, steely blue-grey of the canyon walls in the background.

Back in Connecticut, in 1897 Twachtman, Childe Hassam and J. Alden Weir were instrumental in forming a group of impressionist painters called “The Ten American Painters”, later known as “The Ten”.  Other prominent members included Edmund Tarbell, Frank Benson, Thomas Dewing and Willard Metcalf – and by and large they all portrayed scenes of countryside serenity or summertime at the shore with pretty women and girls in white in a luscious impressionistic style. 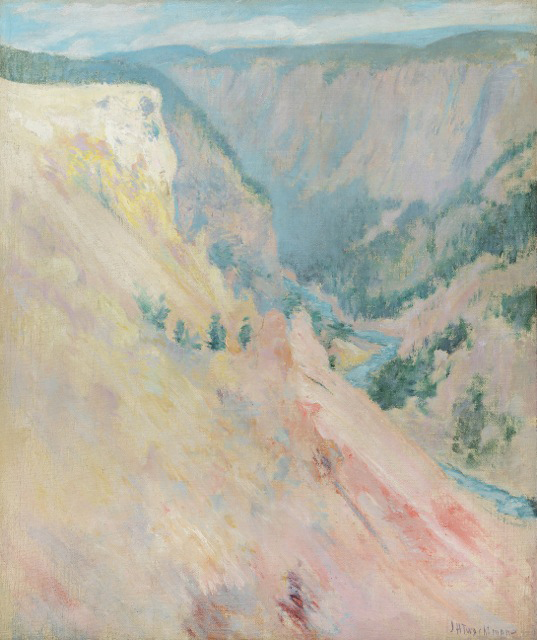