Coffee Cup relates closely to Graham’s painting known as Two Eggs, also of 1928, in the Phillips Collection, Washington.  The egg shape first appeared in one of his paintings in 1925 and would be a feature in several subsequent paintings as well as in the work of several of Graham’s colleagues, including de Kooning, Davis and Gorky.  As observed by William Agee in his essay “Graham, Gorky, de Kooning: A New Classicism, an Alternate Modernism” in the catalogue for American Vanguards,

in reference to the egg shape: “In fact the multiple shapes and forms it suggests are evident in most of the egg paintings by Graham, and, as we will see, by de Kooning. As such, its multiple meanings refer to Cubist practice, now transferred to the figurative, an interesting cross-pollination within the Graham circle. The egg clearly establishes the center for our focus….it is one of the primary shapes and establishes a remarkable rhythmic succession of curves, countercurves, and circles, almost like a musical composition. The egg – two eggs, actually, on a tipped plate that repeats the shapes – became the single subject in Two Eggs, a beautiful and remarkable painting, almost unique in American art. Its inversion of scale and the old master shading make it seem a fusion of the classical with new modes of Cubism and even Surrealism. At the same time the figurative mode places it in the tradition of Henri-Sloan realist art…Graham’s mastery, achieved in barely six years of art practice, is to be marveled at…Graham followed Two Eggs with a companion painting in the same year, like a serial sequence, that altered the angle of the objects and added a coffee cup [Coffee Cup, La Tasse de Café]. The shading of the whites is brilliant, working with monochrome and its variant values in a way that suggests the chiaroscuro of Leonardo or Caravaggio. By this time, Graham was developing what he and others were calling Minimalism…” 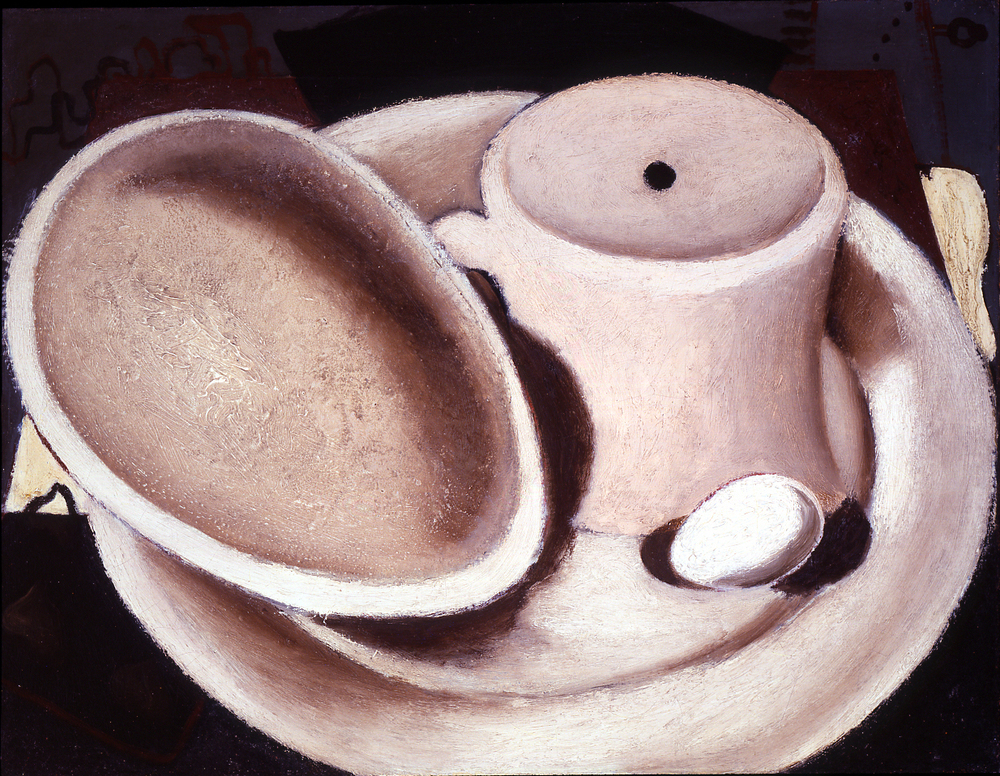