Prof. M. A. Hitchcock, Hartford, CT, 1862
By descent in the Hitchcock family to Thomas Hitchcock,
Hartford CT, until 1980
Private Collection, CT, 1980 to present

McEntee was admitted to the august National Academy of Design in 1860 in recognition of his painting Melancholy Days (now lost).  To quote Charles Eldredge in his essay for Collegial Collectors, “Scenes registering states of mind, either the maker’s or the age’s, through the ostensibly descriptive treatment of nature often appeared at moments of stress, as during the Civil War.  In 1862, in the darkest days of fratricidal slaughter, McEntee exhibited another ambitious canvas at the Academy, The Fire of Leaves, which illustrates his admitted ‘preference for the soberer phases of Nature, the gray days of November and its leafless trees.’  In a drear and empty landscape, between separate paths by which they arrived at this foresaken spot and by which they might depart, two boys huddle by a smoldering fire, their companionship the necessary defense against the encroaching gloom and cold; on the ground beside them lie their caps of blue and grey, a small but crucial detail that provides the piquant clue to the painting’s pacific metaphor.”

As Eleanor Jones Harvey observes in The Civil War and American Art, “The idea of reconciliation found similar expression in one of Jervis McEntee’s tender yet somber landscape paintings. The Fire of Leaves of 1862 takes its title from the two small boys huddled over a tiny flame they have kindled from the dry leaves at the edge of a wood.  One is dressed in blue, his kepi hat beside him, the other in butternut with a red scarf and slouch hat.  Their clothes evoke the uniforms of the Union and the Confederacy.  Like Cropsey’s painting of Richmond Hill, the message is understated, representing a yearning for peace based on mutual regard.  In the fading light, McEntee’s two children have shed their differences, drawing close, knowing that in the shared warmth of the fire and their bodies lies their survival, here and now, and for the future.  Children – so often read as portents of the future – here, whether playing at soldiers or as literal adversaries, have abandoned their quarrels, finding common cause.  The underlying message of McEntee’s The Fire of Leaves is subtle, yet pointed.  The future will quite literally be in the hands of children raised on war. Their ability to step beyond their differences and find strength in their commonalities will determine the country’s future. This landscape offers choices: different paths to take, different directions.” 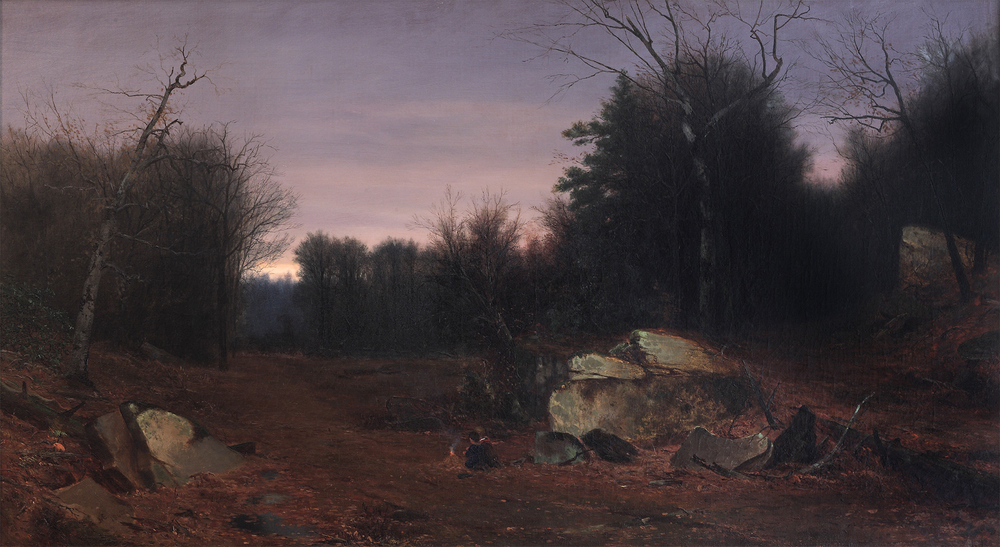