Irene Rawlings, Painters of the American West (Denver: The Anschutz Collection, 1981), no. 99

Masterpieces of the American West: Paintings from Anschutz Collection, US AIR Magazine (August 1985): 49

Man, Bull, Bird was painted during the period 1938-1941 when Pollock was working in the easel division of the Works Progress Administration's Federal Art Project, which provided him with a source of income and played an important role in furthering his artistic development. The canvases, drawings and prints that survive from this period illustrate Pollock’s complex synthesis of sources as well as the emergence of his original pictorial language. At this time Pollock worked under the influence of Picasso, certain aspects of Surrealism, especially the use of mythical or totemic figures as archetypes of the unconscious, and the Mexican muralists José Clemente Orozco, Diego Rivera and David Alfaro Siqueiros. In the late 1930s and early 1940s he created a series of paintings with mythic and sometimes, brutal themes under the impact of these varied influences.

Kirk Varnedoe has noted that many of his works of the time are “centered in dark oppositions or gloomy menace” (“Comet: Jackson Pollock’s Life and Work,” essay in Jackson Pollock [New York: The Museum of Modern Art, 1998], p. 30). Man, Bull, Bird appears to reflect Pollock’s exposure to Picasso’s Guernica at the Valentine Gallery in New York in the spring of 1939, and also demonstrates the fiery palette and bold, expressionistic painting style of Orozco. 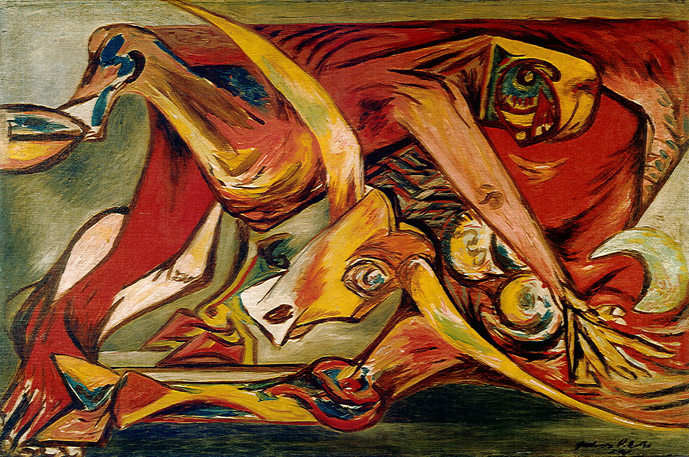