Bricher was born in Portsmouth, New Hampshire and raised in Newburyport, Massachusetts and was largely self-taught; he is known to have produced paintings by the early 1850s and established a studio in Boston in 1859.  Bricher frequented favored locales of the Hudson River School artists, including the Adirondacks, the Catskills and the White Mountains.  He settled in New York in 1868 and from then until the end of his life he concentrated on marine subjects along the New England and Long Island coasts.

Coastal Scene at Twilight conveys an atmosphere of serenity and idyllic summer peace. Much attention is paid to the varied shapes and translucency of the waves as they crest and curl towards shore, under a dramatic sunset sky. Bricher’s sensitive renderings of water, his hallmark, were highly regarded by critics of the day, one of whom noting that the artist made “water sparkle like diamonds in a silver setting” (cited in John Duncan Preston, “Alfred Thompson Bricher”, Arts Quarterly 25, Summer 1962, p.149).

Dating from the early 1880s, this is one of a series of coastal sunset scenes featuring rock formations that resemble the work of John Frederick Kensett; several of these paintings were included in an exhibition of 1882 at Doll & Richards Gallery in Boston. Art historian Natalie Spasky has conjectured that Haseltine’s paintings “of sunstruck, fissured rocks on the New England coast may have prompted Bricher to turn from landscapes to marine paintings in which large rocks dominate the foreground” (American Paintings in the Metropolitan Museum of Art, 1985, Vol. 2, p.517). 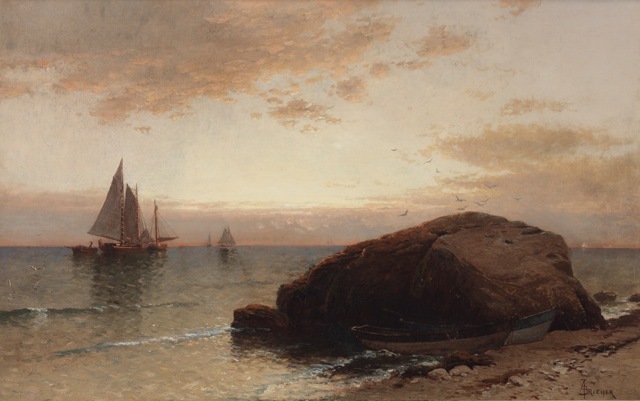